This post was originally posted on Dan Martin’s website as Where I’d rather be this Monday back in 2011 but it’s winter and it’s racing-season, it’s a different month but the same holds true.

Where would I rather be this Monday morning?

If I could be anywhere this Monday morning it would probably be in the Yukon Territory, Canada. That’s where I was three years ago; racing in the Yukon Arctic Ultra, touted by the organisers as the world’s coldest and toughest ultramarathon (we were entered in the 100 mile foot event).

I’d rather be in Whitehorse where there’s a depth of genuine and generous hospitality that we’ve never experienced before in any other part of the world. Whitehorse is the capital of Yukon Territory, an important supply station during the Klondike Gold Rush and a virtual metropolis in a territory that contains just over 34,000 people but with a land mass double that of the United Kingdom. I’d like to be eating French-toast dusted with icing sugar and heaped with crispy bacon whilst enjoying an iced tea in the High Country Inn.

Whitehorse is also the start point for the Yukon Quest International Dog Sled Race, over 1,000 miles over rough terrain to Fairbanks in Alaska.  This Monday morning I’d rather be amongst the manic, dervish-fury of the dogs as they wait to be unleashed from their tethers. 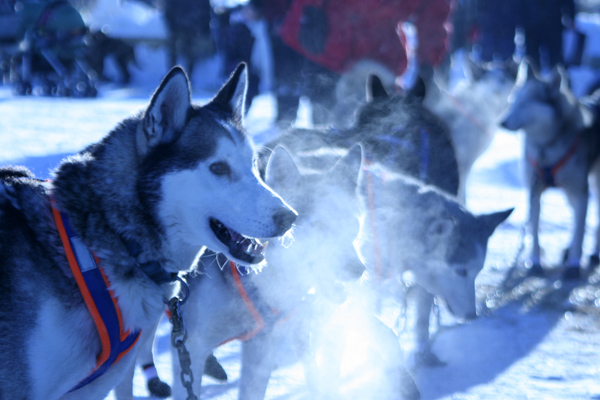 I’d rather be on the Takhini River going west towards the winter sun with good, solid underfoot conditions making the miles fly in. I’d maybe not want to be trying to get some feeling back in my left index finger after getting severe frost nip whilst mending my pulk or watching my friend and team-mate, Garry Mackay, stepping in overflow and wondering whether our race was over.  But these are the things that test our resolve and form our character so maybe I’m glad to have experienced them. 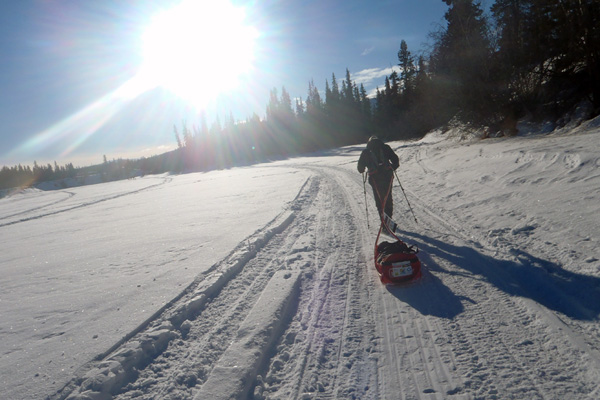 I’d like to be on the Dawson Trail, heading north, having experienced the almost luminescent glow from the stars the night before whilst lying, shivering in my sleeping bag. And I would have liked to have witnessed the aurelius borealis, the northern lights, which I have never seen (sic: Lee has now seen these during the Rovaniemi 150 race).

This morning, like three years ago, I’d like to be entering Checkpoint 2, at eight o’clock at Dog Grave Lake and revelling in the ‘holy trinity of cold-weather ultras’: warmth, food and hot water. I’d like to be rejoicing in the relief from -40°C despite the walled-tent being at minus 10°C whilst eating chocolate brownies.

I’d rather be racing in the frozen valley of Klusha Creek whilst staring out at the mountains all around: Cub, Division, Belleview and in the distance Mount Vowles. I’d rather be looking at the animal tracks in the powder snow beside the trail; moose, elk, lynx (they didn’t tell us about that until the race briefing) with one eye on the trail and the other half looking out for the bear which made the dinner plate-sized paw prints. I’d rather be feeling fresh and picking off competitors in front of us and giving them a cheerful ‘hello’ as we race past.

Finally, this Monday morning I’d rather be coming into the finish line at the Braeburn truckstop and being bullied into eating a head-sized burger with everything on it. I’d rather be glad I’m warm and well whilst champing at the bit and planning for the next race. 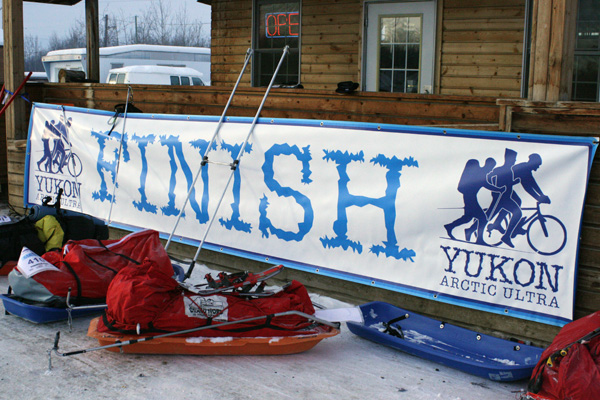 If you could be anywhere this Monday morning, where would it be?