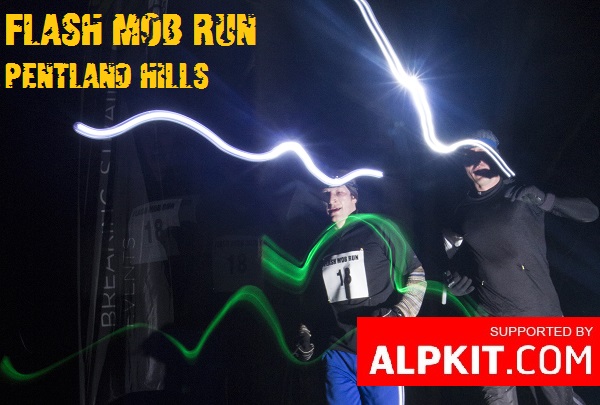 The Flash Mob Run was brilliant and a total success. Then again, we would say that.

It is fair to say that we had quite an emotional investment in the concept and were keen for it to work and be well received. I think we can come away from this one with the proverbial boxes ticked, some happy runners and a few cracking photos to boot.

It didn’t come easy though. When we conducted the recce of our original planned route last month it became apparent that we had been a bit ambitious with the level of exposure and number of summits. In addition, the lack of a marked path meant there was a decent chance that we could use a thousand glow sticks but if the fog came down like it did that night.. we’d have a dozen or so lost runners on our conscience.

Back to the drawing board.

Our new route involved clearer defined paths and a turnaround at the summit of Castlelaw just above the military firing ranges. We think this worked quite well as it had the right mix of challenge, amazing views of Edinburgh and rolling terrain.

As this was a beta/test event, we had limited entries to 25 and having hit that number in advance we were glad to see the majority arrive and compete on the night. After a fairly rapid registration period we conducted a safety brief and got the field ready to run. Watching the enthusiasm with which everyone headed out into the blustery darkness (almost) made us jealous of them. It’s the one part of the move from competitor to race director that is always a bit strange, you get a different type of pre-race nerves but there’s nothing to rival that buzz of uncertainty and excitement that you get in the 5 minutes before you start any distance of race. 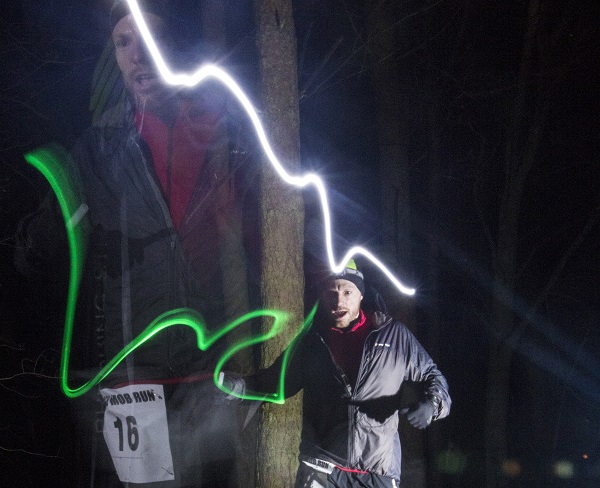 The one thing that shocked us on the night was the speed with which a large number of competitors completed the course. The top five were back with us in under 55 minutes with over half the field smashing in times under or around the hour mark. Brilliant to see and kudos to all involved. Click the link below for the runner’s times.

The race also gave us the opportunity to develop a couple of partnerships that we have established recently. Firstly thanks to Richard and his team at Beyond Marathon who provided us with access to their timing app “Race Timer Pro” as well as the digital chips for the race numbers. We are keen to utilise their innovative approach to Near Field Communications (NFC) technology more in the future and the system proved totally reliable and a great assistance in logging racers in and out. It is a system that will lend itself well to ultra-marathon and multi-checkpoint type event where the android-enabled scanning system will be very effective and really well suited.

We also received some great support from Alpkit who generously agreed to sponsor the race and provided a number of their Gamma headtorches to boot. These are rated highly amongst the entire running community and once you use them you can see why. A couple of the runners took them out to test them on the race too and the feedback was genuinely very positive. We’ve used their kit before during races in the Yukon and Arctic and Lee took the Alpkit Filo down jacket to the Arrowhead 135 so we knew that they invest a lot of thought into the reliability and suitability of gear, but it’s great now to have them on-board supporting at an event level too.

Looking ahead, we’re keen to identify suitable venues around the country to host the Flash Mob Run concept and we’ll definitely make a return trip to the Pentland Hills Regional Park. For a site that is less than 10 miles from Edinburgh City Centre it offers a hugely diverse range of routes and challenges.

I’d also like to take this chance to thank the support team from the race which included Les on a fairly blowy outer marker on the summit of Castlelaw, Wes at the foot of the big climb, Gavin marshalling the road transition and Kate & Sarah who not only administrated timings at the start/finish line but also fed and watered everyone once they’d finished. Most appreciated. Thanks also to Lucy, our race photographer, who captured some dazzling and atmospheric images.

If you enjoyed the event, liked the look of the photos or simply fancy something a bit different in the future, keep and eye out for our next Flash Mob Run.