John Owens has recently been in the limelight for his heroic accomplishment of 'Davy's Run'. The self set challenge saw John run 1000 miles to commemorate his best friend, Comrade David Davis, who tragically took his own life in 2016. Determined to raise awareness of PTSD and other mental health issues, whilst simultaneously fundraising for Help for Heroes and Chest Heart & Stroke Scotland, John set out to complete two marathons, six half marathons, twelve 10K races, the River Ayr Way ultra marathon relay, finishing with the Great Scottish Run. Read more about 'Davy's Run' on the Daily Record or Help for Heroes website. We were honoured to see our own event, Run the Blades, contribute towards one of John's chosen half marathon distances.

Following up from Run the Blades, we were eager to gain more insight into John's inspirational story and his motivations behind it all. John has since very kindly answered 7 questions for us. Have a read below.

Q.1. Describe yourself in 5 words.

Q.2. How would others describe you?

Others describe me as being full of life, and a great ambassador of the running community and sporting world.

Q.4. We met at Run the Blades this year. What motivates you to run?

My motivation for running comes from a very young age, involved in local athletics with CAAC (formerly Cumnock Running Club) up until when I joined the Army, I broke the record for the mile and a half entrance run at Recruit Selection Centre. I maintained this throughout my career until it was cut short through illness. (As I suffered a second stroke) I've continued this motivation on two separate occasions - first of all my own recovery journey which has helped me stay focused with a goal to accomplish. And secondly, most recently losing my best friend to suicide. I fear if I give up now I'll regress back into depression and anxiety - having achieved so much.

1,000 miles saw me run that distance following the death of my Army colleague, David Davis. We were the best of friends and always there for each other. I learned of his suicide just a few days after I had completed my own recovery from PTSD, anxiety and depression, through a great summer of running (my adapted 22 Push Up Challenge) in which I utilitised social media for thanking everyone for doing the challenge, raising awareness of PTSD and sharing my own experience of how this can effect lives, through blogs and video diaries.
At his funeral, while listening to the chorus of bagpipes and motorcycle engines, while fighting back the tears, I had to do something in his memory. Davy's Run was born, my aim to complete a double marathon challenge London and Stirling (just 3 weeks apart) as we both worked in those locations. So after confirming a charity place at London with Chest Heart and Stroke Scotland, I raised vital funds for the work they do, Stirling Marathon saw me raise awareness of Suicide through Help For Heroes Hidden Wounds programme. Following the success in Stirling I decided to continue Davy's Run onto October (exactly one year on from his death) which would see me conquer 1,000 miles.

Q.6. What's been one of the biggest barriers to your running?

My biggest barrier to running has been fear. Being afraid of not finishing the run, having a panic attack during an event, not knowing if I can complete the distance and calculating a good pace for a PB. Most of the time I fight this off by believing in myself and my own abilities. Always remind myself of the reasons why I run and how lucky I am to still do so.

Next for me is hopefully Antonine Trail Race Half Marathon (October) to end the season with. Followed by a few months of relaxation and recovery before resetting in the new year with a new training plan for Strathearn, Liverpool and Run The Blades Half Marathon's - and if lucky enough Loch Ness Marathon. Aside from running, continue to raise awareness of suicide through various charities and being a motivational speaker, ensure Davy's Run is always kept alive to inspire and encourage a healthier happier lifestyle. 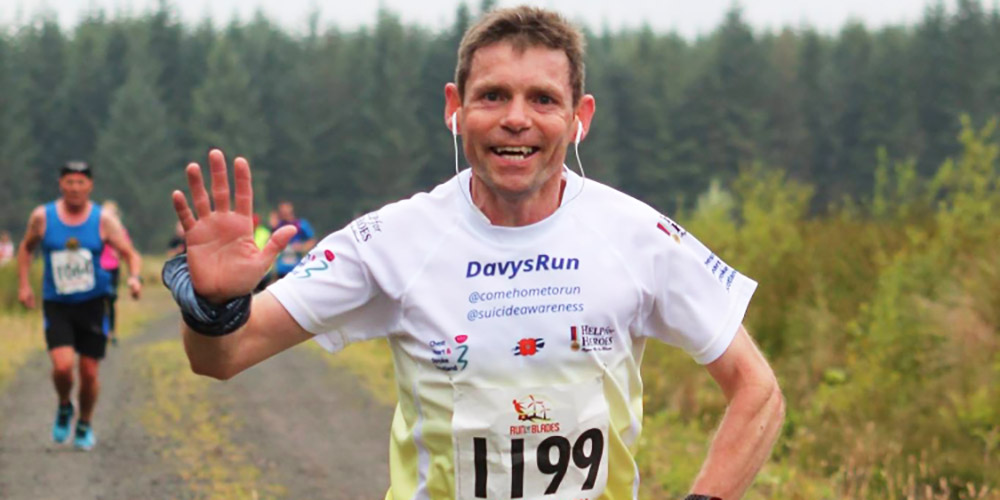 Credit where credit is due to you, John. We look forward to welcoming you at Run the Blades 2018. Keep smashing those goals mate.