You’ve got a long leg from the UK to Tanzania. One of the Breaking Strain team leaders will either be travelling with you, or be there to meet you at the airport upon your arrival. For your convenience, the first night in country will be spent at a Kilimanjaro International Airport Hotel.

Preparation Day
Jambo! Wake up and absorb the African culture. Preparation is key today. We’ll transfer through to Moshi, the town known as ‘the gateway to Kilimanjaro National Park’. Here, you’ll meet your trek guide, who can answer any of your queries. We exclusively use local guides – we like to support local communities, plus these guys know the routes and surrounding habitats better than anyone else. We’ll arrange a kit check to ensure that everyone’s comfortable and raring to go. Tonight, we’ll be staying at the 3* Weru Weru River Lodge (or equivalent), where you can chill out and psych yourself up for the challenge ahead.

Trek Day 1: Machame Gate to Machame Camp
Elevation: 1790m – 3010m
Distance: 18km
Trekking time: Approx. 5-7hrs
Habitat: Montane Forest
Rise and shine, we’ve got a one hour drive to Machame Gate (1790m), the starting point on the Machame route. From the southern base, we’ll ascend from the arable lands of Kili’s first zone of vegetation into the lush rainforests of zone two. As the air thins later in the day, you’ll notice the trees transform into moorland, as we ascend further into zone three. 18km and approximately 5-7 hours later, we’ll arrive at our first night camp - Machame Camp (3010m). Time to refuel and get some much needed shuteye. Day one complete.

Trek Day 3: New Shira Camp to Lava Tower to Barranco Camp
Elevation: 3845m – 4640m – 3960m
Distance: 15km
Trekking time: 8-10hrs
Habitat: Semi-Desert
Today we’ll ‘walk high, sleep low’, to allow for acclimatisation. A short burst of high altitude before descending again to camp will prepare our bodies for summit day. From New Shira Camp (3845m), we’ll climb to Lava Tower (4640m) – nicknamed ‘Shark’s Tooth’. The unique rock feature was formed back in Kili’s active volcanic days. This will be your first taste of life in zone four, and you may well begin to experience symptoms of altitude sickness. From this point, we’ll descend to Barranco camp (3960m) for the night. Achieving a daily distance of 15km in approximately 8-10 hours.

Trek Day 5: Barafu Camp to Summit (Uhuru Peak) to Millennium Camp
Elevation: 4600m – 5895m – 3790m
Distance: 20km
Trekking time: 7-9hrs
Habitat: Stone Scree and Ice-Capped Summit
We’ll rise before the sun today, starting our summit ascent from Barafu Camp (4600m) in darkness. Expect heavy scree, snow, glaciers, and strong sun today. Conditions can change dramatically when ascending into the Arctic Zone - Kili’s fifth zone of vegetation, so be alert. After climbing one of the most demanding portions of the trek, we’ll reach Stella Point (5739m) to take in the sunrise. We’ll then ascend to the summit or 'roof of Africa', reaching Uhuru Peak (5895m). Mission accomplished. Time to bask in the glory (and take a couple of selfies) before we start our descent. After a whopping 20km in approximately 12 hours, we’ll arrive at our last night camp - Millennium Camp (3790m).

Travel Day
You’ll wake up with a bittersweet feeling, it’s home time. We’ll transfer back to Kilimanjaro International Airport and depart back to the UK. A once in a lifetime experience ends, but the epic memories and new friendships will stay with you. Congratulations, you can tick Kilimanjaro off your bucket list.

*Please note - this itinerary is a flexible sample, other routes and durations are available on request. Get in touch with the Breaking Strain team to discuss your bespoke trek. 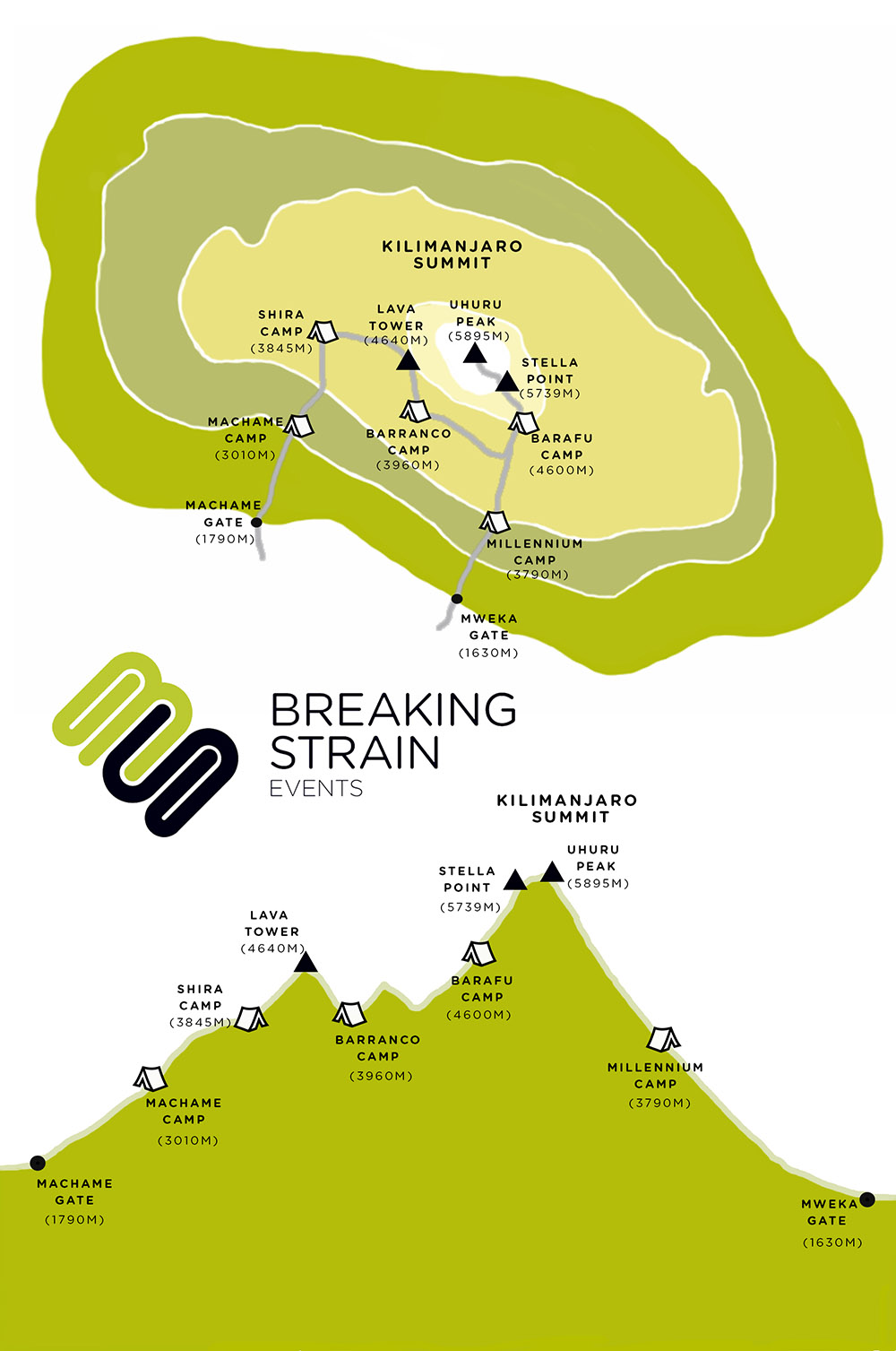